1.1. Ten players participate in the game. The game is conducted at a round or oval table with seats numbered 1 through 10. The table also has a seat for the moderator who monitors the course of the game and regulates its stages. The moderator may have assistants to help conduct and direct the game.

1.2. Prior to being seated at a table, each player pulls a card containing the seat number. In some tournaments seats may be pre-assigned for all participants in order to make them play in different positions throughout the tournament. There are no advantages or disadvantages associated with the number of the seat. The players are called by the number of their seat. For example, the player in seat 2 is called player number 2. When all players are seated at the table and greeted by the moderator, the game begins.

2.1. The game is divided into 2 phases: "day" and "night." Each player has a personal mask, which is used to cover the eyes during the "night." The moderator announces "Day" and "night."

3.1. The games starts with a "night," and all players immediately (wihtin 3 seconds) put on their masks. All players must keep their hands in front of them on the playing table and keep their heads down. Touching masks with their hands during the "night" is forbidden. Also forbidden to speak, sing, dance, tapping on the table, moving closer to other players, and doing anything that will disturb the "night." The moderator gives a warning for such behavior.

3.2.1. Then, one by one, each player is allowed to remove the mask and choose a card from a deck of 10 cards. The player seated under number 1, chooses first. When a card is chosen by a player, it is eliminated from the deck. Thus, when it is 2nd player's turn to choose, there are only 9 cards left in the deck, only 8 cards left for the 3rd player, 7 for the 4th player, and so on. After choosing the card, each player puts the mask back on, thus no player can see cards chosen by other players.

3.2.2. There are 7 red ("CITIZEN") and 3 black ("MAFIA") cards in the deck. One of the 7 red cards differ from the others - it is the card "SHERIFF" - the leader of "CITIZENS." "MAFIA" also have their leader, the player who pulls the card of "DON." Thus, the players are divided into two groups: CITIZENS and MAFIA. The object of the game is the elimination of the opposite team members. 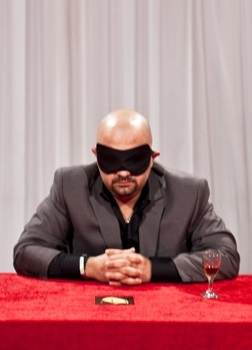 4.1. During the same "night," when all the cards are chosen, the moderator announces, "The Mafia awakens." Then, the players who picked black cards, including the Don, take off their masks and become acquainted with one another. This is the first and the only night that the mafia members open their eyes all at the same time. During this "introduction," the black players can set up their plot for the elimination of red players. The "discussion" should be made quietly, so that the "red" players do not hear or feel anything. The black players have only 1 minute for their "communication." The moderator announces: "The Mafia sleeps." After these words the "black" players put their masks back on.

5. Then the moderator announces, "Morning. All wake up" on the first day. All players take off their masks. During the "day" an open discussion takes place. The purpose of the discussions and the game as a whole for the "CITIZENS" is to bring to light and eliminate "MAFIA," and for the "MAFIA" - to confuse the other players and "frame" and eliminate "CITIZENS." "MAFIA" players have a considerable advantage in these discussions, since they know who is who in this game.

Each player has a minute to express ideas, thoughts and suspicions. The player in seat 1 begins the discussion on the first day and the rest of the players get their turn in order.

5.2.1. At the end of the discussion, when all players have expressed their ideas and "nominations," the moderator announces the phase of voting. No more gestures are allowed at this phase, and a player is given a warning for breaking this rule.

The moderator announces all accepted nominations and voting takes place. Each player is allowed to vote only for one candidate. The voted-off player has the right to a last statement (no more than 1 minute) and must then leave the table.

If two or more players receive an equal of the greatest number of votes, further discussion takes place. In this case, the players with the most votes are allowed an additional 30-second speech in order to plead their case and ask not to be voted off. Then the second round of voting takes place with the choice to vote only for the candidates with the largest amount of votes. The voted-off player is still awarded a last statement (no more than 1 minute) and must then leave the table. In the event of a second draw in which candidates still receive the same amount of votes, the moderator requests all players to vote either to keep the candidates in the game or to vote them all off. If the majority votes for elimination, all candidates are considered voted-off and leave the table. If the majority is against it or the votes are divided, the candidates remain at the table.

When all the discussion is over, the moderator announces, "Night," and all the players put their masks back on. During this and the following nights, the "blacks" have the opportunity to eliminate players by "shooting" them. "Shooting" takes place in the following way. The moderator announces "Mafia goes hunting" and then numbers of remaining at the table players in chronological order. Each MAFIA player, with their masks on, imitates the shooting by their fingers at the time, when the moderator announces the number of a player, they want to shoot. If all members of Mafia "shoot" at the same player, that player is considered eliminated. If the Mafia members "shoot" at different players, they miss; it therefore it is imperative for the MAFIA players to plan the sequence of player elimination during the first night, when they all see each other. If only one member of the MAFIA team left at the table, he or she can also "miss" by not "shooting" at all. 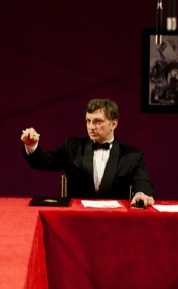 This same ritual continues during subsequent "nights," even when the Don or Sheriff are voted off or eliminated from the table, in order to avoid providing additional clues as to the remaining players.

The moderator announces, "Morning. All wake up." All players take off their masks. The moderator reveals the results of the "shooting." If the "Mafia missed," another day discussion begins. If the "shooting" was successful, then the eliminate player has the right to say last words (no more than 1 minute) and must then leave the table.

The game continues in the order of "day" and "night." The "CITIZENS" win, when all "MAFIA" players are voted off from the game. The "MAFIA" wins, when there is the same number of "CITIZENS" and "MAFIA" players left at the table. Please also WATCH THE VIDEO animation of the rules.

1. Players have no right to exchange seats with other players.

3. Players are allowed to speak only at their turn. For speaking without permission from the moderator, players receive a warning.

4. During discussions, players are allowed either 1 minute or 30 seconds for their speeches and must stop when the moderator says "Thank You." If the player continues to speak in excess of the allocated time, a warning is given.

5. Players have no right to sing, whistle, dance, bang on the table, talk or create other distractions to disrupt the course of the "night." For this violation, the player receives a warning from the moderator.

6. The moderator has the right to give warning to a player for:

b. excessive gesticulation, hindering the course of the game and diverting players' attention from the game;

c. other violations determined by the moderator.

7. After 3 warnings, the player loses the right to speak during one round of discussion (the player is still allowed to nominate a candidate to be voted-off, however).

8. After 4 warnings the player is dismissed from the game.

9. The dismissed player should immediately leave the table and has no right to a last statement.

10. Players have no right to curse or insult other players. For this violation, they are dismissed from the game.

12. While voting, players should keep their hands on the game table till the end of voting, when the moderator announces "Thank You." For violation of this rule, a player is dismissed from the game. The player is dismissed from the game for voting for more than one player during the "day." If a player doesn't physically vote, then that player’s vote is automatically counted for the last candidate.

13. A warning is given to a player showing the number of a candidate to be voted off after Voting is announced by the Moderator.

14. As soon as the moderator announces "Night," players should immediately put on their masks. In case of a delay, a player receives a warning.

15. A player is dismissed from the game for shouting "who to shoot at night" after the announcement of "Night." If the player only shows the number of to be shut player, then that player receives the warning.

16. A player is dismissed from the game for showing/hinting the number of to be checked player during the sheriff's round of cheching.

17. Players, individually or as a team, have the right to protest the outcome of a game if they believe that the rules were violated. In this case, moderator, along with the assistants and the president of the club may review the video recording of the game and make a decision for or against annulment of the game. In the case of annulment, the game is played again.

18. If a player protests before the end of the game, that player is dismissed from the game.

SOME PECULIARITIES OF THE GAME

The Sheriff has information about true identity of "checked" players. If the Sheriff finds a MAFIA player, then an effort must be made during the "day" to vote-off that particular player. Yet, the Sheriff should try to keep his/her identity closed, for otherwise the "MAFIA" would try to vote him/her off or eliminate at "night" in order to exclude the possibility of further checks. Sheriff's elimination makes the game more difficult for the "CITIZENS" since their team loses the only source of true information. Yet, if the game becomes too complicated or situation becomes critical, the Sheriff should open up and identify "checked" players in order to rescue the team from a defeat.

A "MAFIA" player can also bluff - open up and pretend to be Sheriff in order to mislead the "red" team. In this case, the true Sheriff, as a rule, should also open up in order to clarify the game for the "red" players and avoid their complete confusion.

The "MAFIA" team can also eliminate one of their own during the night. This bluff allows one of the MAFIA players to open up as a Sheriff during the last statement and confuse the "CITIZEN" players by falsely framing "checked" players.